Salentein wines on a fine evening

The beginning of this year looks very promising in terms of interesting events for wine passionates to attend. One of the first events to kick-start the „wine tastings” season in Bucharest, featured a most prestigious winery, in an elegant setting: a lineup of ten wines from Bodega Salentein, at Vinexpert Wine&Champagne Lounge in Bucharest. This modern and bold setting has become recently a wine tasting centerpoint, featuring regularly top producers from local wine region or abroad. I should only mention the fascinating encounter with Jean-Claude Mas and his wines from Domaine Paul Mas, and the lineup from Davino.

The host of the evening was Rob van Oorschot, the brand ambassador. It is probably quite obvious so far that neither the name of the producer, nor of the sales representative have any linguistic resemblance with Spanish (or Argentinian, for that matter). This is due to the fact that the founder of the modern winery is in fact of Dutch origin, having bought an old estate in the mid 90s. After expanding the property and replanting many of the vines, they released their first vintage in 1999, and since then Bodega Salentein was among the producers that managed to put Argentina firmly onto the exclusive list of high class wine producers.

Today they have about 2000 hectares, placing them among the mid-level Argentinian producers. The best parcels of land are divided

into three „fincas” -unitary plots of land located in different micro-climatic regions. The highest of the fincas enjoys the sun and air purity from 1700 m altitude, being irrigated with snow-melted water. These unique conditions -high altitude, great thermal amplitude, UV rays from closeness to the sun and low Ph water -all concur to create a thick skin to grapes, resulting in high acidity, long ripening, and a high flavors concentration. The average yield is 6 tons/hectare, depending of the age of the vines: the youngest have been planted in the mid 90s, while the oldest vines from the former estates can reach 40 years.

They grape selection consists of mostly reds and a few whites, favoring mostly the international varieties: Sauvignon Blanc, Chardonnay, Merlot, Cabernet, Shyrah. And of course, the grape for which Argentina is famous, Malbec, could not be forgotten. Their wines are grouped into several product ranges, from entry level to selected harvests. Resulting, Salentein is known both for high-end premium world-class wines, as well as great quality at very affordable prices: some of their wines can be found in the wine lists of KLM and Air France airlines.

The tasting itself was rather informal, the speeches and wine descriptions revealed the essential information, giving enough room for questions, debates and ..relaxed chatting. Not too relaxed though, since ten wines were ready for tasting, along some fancy finger-food and snacks.

Three whites were served: a sparkling Cuvee Exceptionnelle Brut -a classic blend of Chardonnay and Pinot Noir, a flavorful Sauvignon Blanc 2011 with a small touch of oak barrell (1 month), and a mild and surprisingly delicate Chardonnay, silky with a ripe finish.

The first of the reds that were served is a great example of affordable quality: Portillo Malbec 2010. A stainless-steels fermented and aged 100% Malbec, with a screwcap closure, it preserves wonderfully the fruity and juicy aromas. Its tannins are mild and ripe, combined with the gentle flavors of plums and mullberry, and medium-low acidity make this wine very pleasant and easy-drinking, a great example of Argentinian Malbec. It can be bought in Romania for around 34 Lei, the equivalent of 7-8 Euros/bottle.

The next couple of reds were more mature –Salentein Reserve Cabernet and Salentein Reserve Malbec, both from 2010. The ageing for 12 month in oak barrells from the first  to the third use, has provided more depth and structure. Still, the influence of the terroir (high altitude) is very perceptible in the ripe and juicy flavors. My favorite of the two was the Cabernet, a good example of a mild and feminine version of this grape: flavors of dried plums and raisins, some aromatic herbs, a medium texture with soft tannins and a licorice aftertaste.

The Salentein Numina 2007 is the only blend included in the official lineup of the tasting. The proportions of the blend are

changing each year this wine is released, in 2007 the highest percentage belonging to Malbec -85% and the rest to Merlot. They were fermented separately, aged in oak barrels for 12 months, then blended from selected barrels,  aged 4 more months and bottled unfiltered. The result is a big and pungent wine, a typical „beef wine”, suitable for the finest asado steaks. I loved its lingering finish, of chestnuts and espresso.

From the top tier of Salentein wines, the following two wines were from the Primus range: Salentein Primus Merlot 2004, and Salentein Primus Malbec 2007. The grapes are hand-picked from selected plants and fermented in big oak casks, matured and aged for at least 18 months in second-fill French oak barrels. The Merlot displays flavors resembling Ripasso wines -cognac, rum, smoked cedar and baked apple, with a medium texture and restrained acidity, while the Malbec is more bold, intense, concentrated, still young in texture. It is considered one of the best Malbecs in Argentina.

The tasting did not end here as I expected, because a surprise was prepared in form of a contest: a surprise wine was about to be presented, and a bottle was offered as prize for the taster who guessed at least two of the grapes composing the blend. The task was more difficult than I thought, since the wine was very complex and layered. The surprise was complete in the end, revealing that the Gran Callia 2010 contains much more than two grapes: Shyrah 40%, Malbec, Merlot and Tannat.

You can follow here a short video from the tasting (and admire my glass swirling skills:) ) and you can watch a small gallery of my photos below. 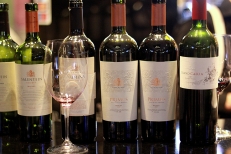 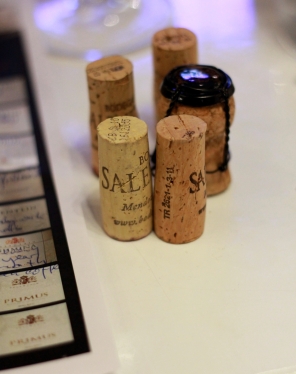